This past weekend we participated in the McGill-Toolen Invitational in Mobile, AL. All of our opponents were from Alabama and gave us great practice for the rest of our season.  The team played exceptional tennis and we are so proud of them!

WE ARE THE CHAMPIONS

The team will travel to Monroe to compete in the state tournament 4/22-4/24! Wish them luck! Go cubs!

Congratulations to Taylor Garcia who signed to play with Washington & Lee next year! We are proud of you!

The team traveled to Monroe, LA to compete in the state tournament 4/26-4/28.

Julia Kapusta defeated a singles player from Lafayette and was defeated by a girl from St. Joseph's who went on to be a finalist.

Gabi DePascual and Niki Bountovinas: Divison 1, Semifinalists! Wins 3 matches defeating a team from Parkway, a team from St. Joseph's, and a team from Byrd.

Katie Brennan and Casey Pappas competed against a tough team from Baton Rouge.

Mount Carmel Academy is awarded for coming in 2nd place in the Regional Tournament! 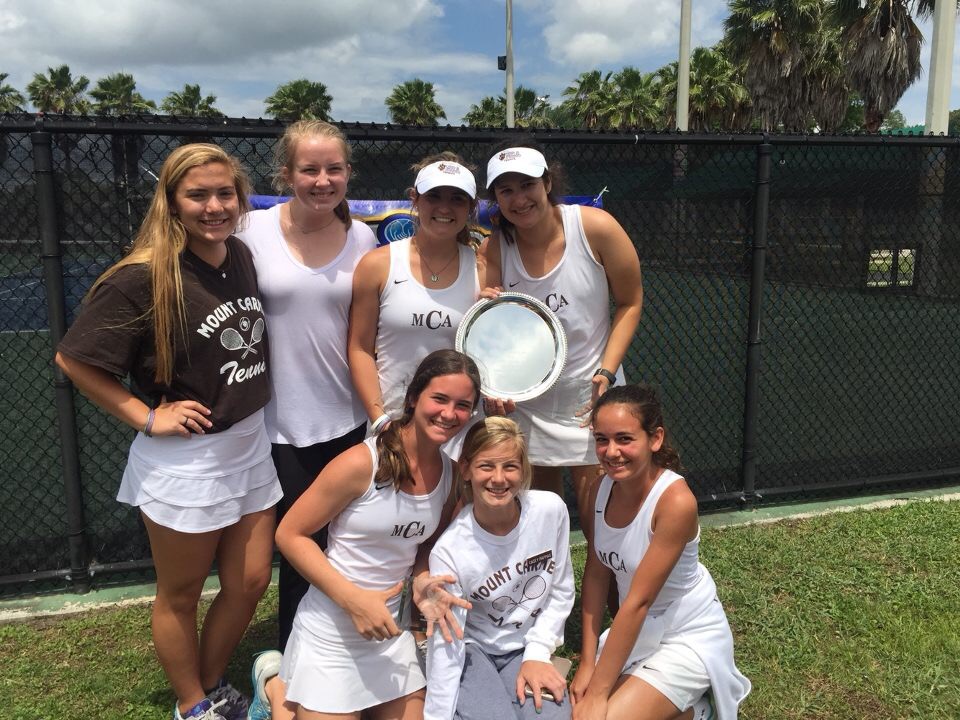 Taylor Garcia won in the finals of the Singles Bracket! She is the 2017 singles champion!

Julia Kapusta made it to the semi-finals in the singles bracket!

Gabi DePascual and Niki Bountovinas made it to the semi-finals of the tournament in the doubles bracket!

Casey Pappas and Katie Brennan made it to the quarter-finals in the doubles bracket!

Grace Heidingsfelder and Bailey Danflous had a great match against DHS.

The match v. Chapelle on Monday, 3/10 was also the Senior match which recognized our seniors who participated in their final regular season match at Mount Carmel. Cleo Pappas, the team manager and former team member, was recognized as a Senior team member. Also, Gabi DePascual and Sierra Grass were able to play together at line one and both were recognized as seniors for their dedication to the team. The three seniors were given balloons, cards, gifts, and flowers from their teammates. The team members really spent time planning the day to honor the girls.

The cubs lost to Dominican after some close matches! The girls fought hard and hit some amazing shots! Thanks to everyone who came out to support the team.

Gabi DePascual and Grace Heidingsfelder win line 3 doubles! Grace was all over the court, covering the open area and returning difficult shots! Gabi hit some great put aways at net and some great serves!

Katie Brennan fought hard at the number one singles spot. The match was too close for comfort! They girls were very evenly matched and Katie played wonderfully! She hit some fabulous shots and played smart!

Bailey Danflous had a tough match at line two singles, but she overcame the struggle for the win! She won the first set. She barely lost in a tiebreaker for the second set win. She won the third set tiebreaker after some very competitive points!

Sierra Grass and Grace Heidingsfelder go head to head almost every game in their match. They barely lose the first set, and lose the second set in a tiebreaker. Great match!

MCA wins all matches against St. Martins, putting the cubs at a 3-0 record!

Katie Bailey and Casey Pappas won line 1 doubles 6-0, 6-0. Katie hit some great down the line shots! Casey threw in some slices and short balls, mixing it up. They played great together!

Kate Heidingsfelder and Grace Heidingsfelder won line 2 doubles 6-0, 6-0. Grace played the net like a pro! Kate had some great shots from the baseline. Their teamwork made the match fun and rewarding!

Sierra Grass won line 1 singles 6-2, 6-2. She changed up her strategy throughout the match to stay on top!

Julia Kapusta won line 2 singles 6-0, 6-0, moving all around the court and placing the ball perfectly to guarantee the win!

The Cubs win all 5 lines against Ben Franklin putting the team at a record of 2-0 for the season!

The girls won all three doubles matches and one of the two singles matches v. Ursuline. Go Cubs!

First win of the season!

Our first local match will be Monday 2/20/2017 vs. Ursuline at City Park. The match begins at 4 PM. Come out and support your Cubs!

Congratulations to the Cubs for coming in second place in the North bracket of the A Draw at the McGill-Toolen tournament!

The tennis team will be traveling to Mobile to play in the McGill-Toolen tournament on February 17 and February 18. Updates and scores will be added to this page periodically. Check in and see how the Cubs are doing!

Thursday, Feb 9th at 6 PM in the cafeteria. You will receive information regarding the season in general, practices, fees, and the upcoming tournament in Mobile. See you there!